Welcome to the Weekend Writing Warriors, the perfect place to discover new authors and fall in love with their writing. Each Sunday we share 8 to 10 sentences from a current or finished manuscript. Click here for the rest of the amazing writers participating.

I’m continuing to share from my upcoming release Shadow Codex. Last week we met Caleigh, a witch on a quest for an ancient codex that is supposed to help her banish an angry god. The final line last week was about Cernnunos, the afore mentioned angry god intent on destroying the planet. “He wasn’t wrong, they had made a complete mess of the world, but sending a plague that killed its victims slowly and with torturous pain wasn’t exactly the best solution.”

Caleigh rubbed her brow. The illness stumped doctors. Panic had begun to creep into the population. Her neighbors and friends were stocking up on supplies. Online articles mentioned gun sales had doubled in the Bay Area in the last five days. And at her store customers had been buying up homesteading and survival books.

So far the outbreaks were contained in four or five major cities across most of the larger countries, but doomsday lovers were quick to point out that if no countermeasures were found, the plague would continue to spread unstoppably. Once the victims had reached a certain number, the balance would tip and humanity would die.

For once those doomsday lovers knew what they were talking about, which was why Mai, Zoe, and Caleigh had been sent on individual quests to find ways to take out the god. It was Caleigh’s job to find this codex, and she had a measly seven days.

Here is the preliminary blurb:

One witch. One shifter. One angry god hell-bent on the destruction of the world.

Witch Caleigh hunts for the Shadow Codex. She has seven days to unearth it and learn the spell to banish a god before he can do the wipe out the world thing. She didn’t anticipate being joined by sexy Sawyer, the man she’s had a crush on for months. After having suffered devastating loss she’s no longer willing to risk her heart, so a crush is all it can be.

Sawyer has one goal: fulfil his duty as alpha and protect his pack at all cost. Being sidetracked by luscious Caleigh wasn’t part of the plan. When he discovers they are after the same book he’s happy to savor every moment with her. That is all he can do. Because bringing a human into a world where physical prowess is everything would kill her.

The chemistry between them grows explosive until danger catapults them over the edge. Caleigh has to decide how much she’s willing to risk. Sawyer needs to determine if his pack is all that matters. When danger closes in it may be easier to banish a god than to face their inner demons.

I’m currently working on the next book in the series and struggled with the opening. Luckily I had dinner with two friends last night and we came up with a much better solution. Now I just need to watch some classic Hepburn/Tracy movies. Such a chore…;)

And of course I can’t leave you without a sexy shifter;).

Happy Sunday and have a fabulous week!

A Year Ago Today Give-Away

A year ago today I became a published author:). 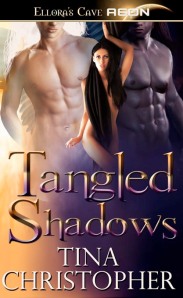 It has been an exciting year with two more stories published and another with my editor. I am working on my second steampunk story as well as the outline for the final book in the Celestial Surrender series.

To celebrate the anniversary I am giving one lucky commenter the chance to choose a copy of Tangled Shadows, Tangled Hunger or Rescue by Ruin. Tell me what you are celebrating this month.