From Prussia With Love Release Day and Give-Away!

Clara Redbeck has one goal: to prove to the sods at work—and to herself—that the best man for the job can be a woman. To do that, she must prevent a traitor from blowing London to bits. If only the dashing first mate of the dirigible she’d been tasked to plunder didn’t set her aflame.

Garrett Dewhurst has one goal: to execute the coup of a lifetime. His plans do not include a spanking dalliance with the most intriguing woman he has ever met.

With each encounter, the fire between them burns hotter and their need grows stronger. Finally, the cramped cabin aboard the Bismarck becomes their intimate playground, where Garrett introduces Clara to the pleasure of submission and they explore their passion in every way possible.

Clara and Garrett want a future together, but each holds a secret that if revealed could cost them everything. When danger closes in, they have to choose between protecting themselves or the whole of London.

To celebrate the release I’m giving away a steampunk necklace and a pair of earrings from Overman. 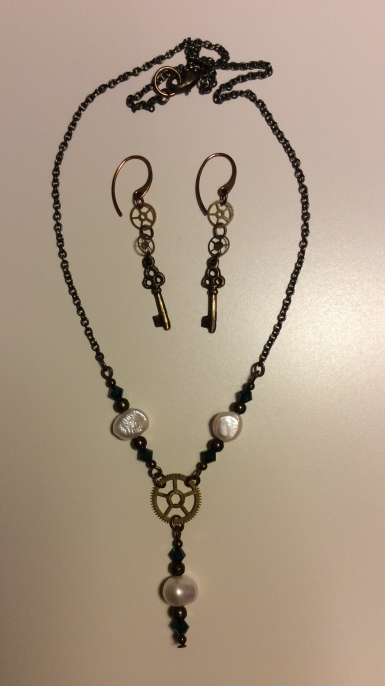 For a chance to win follow me on Twitter (@TinaChristopher) and tweet about the release and the contest using #FromPrussiaWithLove. Or comment on this post and tell me your favourite James Bond movie and why you love it. Each will give you one entry into the contest, which is open worldwide. The contest runs until 12pm EST Sunday August 30th, 2015.

I have to say my favourite is probably Goldeneye with Pierce Brosnan and Sean Bean. I love the action and the characters and it’s one of the few Bond movies where the plot holes are on the smaller side;). When  I worked at Harrods in London I met Pierce Brosnan and he was just wonderful. A complete gentleman and very sweet when a little boy (probably around 6 years) asked him if he was James Bond.