I am very excited to share a review for Tangled Redemption. Stormy Vixen over at the Jeep Diva loved it and gave it 4Stars:). 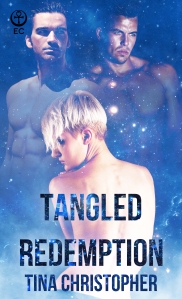 Sydney Radnall is no man’s toy, despite fate’s attempt to make her just that. A kidnapping puts her at the mercy of a sadistic Feral commander. Being held prisoner is bad enough, but her Naema blood is powerful. In her current Vampiric company her presence is like ringing a dinner bell.
In an attempt to break the commander makes her the pet of two of his lieutenants. Miguel is one of the most dangerous men she has ever met, but she can’t stop the attraction blazing between them. Then there is Jayden, a Vampire who is as surprising as he is sexy. Two Vampires she should not be attracted to, should not want to surrender to, should not trust.
But things aren’t always what they seem. Secrets and lies shadow their connections, making it impossible to see clearly. What are the chances of her finding lifemates while surrounded by enemies? And making the wrong decision could not just shatter her heart. It could cost her life.

Well written scenes and details capture the imagination and make it easy for the reader to picture every scene as it happens. Spine tingling suspense and anticipation builds throughout the story as the reader waits to discover just what the bad guys are up to and just what secrets Miguel and Jayden have and Sydney’s fate. The reader can’t help but get caught up in the story as Miguel and Jayden’s hidden agendas complicate their romance and Sydney’s secret could bring about the end for them all.

I was caught up in this story from the very beginning there was lots of intriguing elements, captivating characters and a fascinating world. The complexity of the menage these characters are involved in adds lots of depth and spice to the story especially all the secrets and lies that shadow their every move. I haven’t read the previous books in the series yet and it is not necessary in order to enjoy this steamy romance but since I enjoyed this one so much, I will be remedying that very soon and I can’t wait to read the next one.

Tangled Redemption is currently available at a $5.25 rebate at All Romance eBooks.