Welcome to the Hunky Holiday Blog Hop! The Nice Girls are sharing some of our sexiest heroes with you, giving you the opportunity to meet new hunks, discover new books and win some fabulous prizes. Each Nice Girl is giving away something on their blog. Stop by and comment on a minimum of 5 blogs to be eligible to win the grand prize of  $50 All Romance eBooks Gift Card and the choice of 3 of Tina Christopher’s books (as you can see I’m the sponsor this month;). Click here for a list of all the participants.

I am very excited to introduce you to Jack Smith, hero of Dirigibles Are Forever. 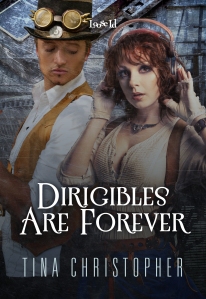 Jack is an agent for Special Branch in 1890s London. He has been living in a world of secrets and lies for a long time. Holidays are not really on his Long Range Visualization Terminal, especially if he is undercover on a mission. His cover is that of an Aether Traffic Controller at the London Royal Port Authority. No problem. He’s a chameleon and able to adapt to every scenario. Except this time he has a supervisor who dominates his thoughts and fantasies.

Holly is just gorgeous and he wants nothing more than to take the next step, but she is the right woman at the worst possible time.  He’s working on Christmas Eve because this is the one night when he can fulfill his mission. Of course best laid plans always explode to cinders. London is experiencing an unexpectedly white Christmas, meaning Holly and he are snowed in and “trapped” at the dirigible station. Then Holly asks him for one night, no rules, no boundaries, only what they can do for each other.

Jack’s now has to choose between his duty and what he’s been dreaming about for months. Guess what he decides to do?

The idea of this blog hop is to share with you what our heroes get up to over the holidays. Let me give you a snippet…

“Before she could worry over Jack and his similarities and dissimilarities to her dead husband, the subject of her obsession returned. Jack carried her Dewar flask and a mug in one hand and a wet cloth in the other. She raised her brows at him, but he only smiled.

Holly couldn’t ask about it as the second vessel had reached transfer distance. “There it is again.” The same inconsistent blip appeared on the LRVT, but this time much farther west than the previous time. And once again it was just that one flash and nothing more.

Jack poured her a cup of tea. “I added the milk downstairs.”

“Thank you.” She had a sip. “Perfect.” She returned to the LRVT and engaged with the navigator of the Nimrod. Or at least she tried, as that was when Jack sank to his knees beside her and pushed the blanket up so her lower legs were uncovered. She covered the speaking tube. “What are you doing?”

He didn’t say anything, only shot her a look that had her nipples tightening and her pussy moistening. Once again, fire burned in his amazing eyes.

He twisted her chair so she was slightly tilted away from her LRVT. He moved between her legs and forced her to open them. The blanket slipped to the floor, forgotten.

Jack pushed up the shirt she’d purloined from him until her thighs were completely uncovered.

Holly pressed the speaking tube against her chest as he used the hot moist washcloth to clean away the marks of their lovemaking. She wanted to moan when he rubbed the rough cloth across her sensitive inner thighs. He pulled a second towel out of his back pocket and stroked the dry fabric in the wake of the wet.

Then he leaned forward and kissed the skin he’d just cleaned.

Her head fell back and the speaking tube dropped out of her hand. He retrieved the tube and passed it to her. His complete silence and knowing smile elevated the tension.

She had no idea what he planned.

And it excited her beyond belief.

Jack gently pushed her legs wider and kissed his way from her knee to the curve where hip and thigh met. He licked the crease where her leg ended and her pelvis began. She’d never known how sensitive that stretch of skin was.

When he pressed the moist towel directly onto her pussy, she jerked and whimpered. Her hand clenched around the speaking tube. The wet heat after the cool room air was a shock, but an exciting one.

Jack slowly pushed one finger covered in the cloth inside her, cleaning her thoroughly. The slightly rough material scraped along her inside walls, raising the sensitivity level higher and higher.

He moved his finger back and forth and her arousal skyrocketed. He pulled his cloth-covered finger out and dropped the towel. Then he leaned forward and blew on her.

Her hips jolted and she screamed.

Jack held her hips down and licked her pussy from one end to the other.

Noise echoed in Holly’s ears, but she couldn’t place it until he lifted her hand still holding the speaking tube.

Holly froze. Heat filled her cheeks. It was the navigator of the Nimrod shouting in her ear. She thrust a hand into Jack’s hair, trying to make him stop, but he only disentangled her hand and held it to the side. “Jack.” She gestured with the speaking tube, reminding him they weren’t completely private.

But he continued to lick her opening, making her wetter and wetter. Holly wanted nothing more than to turn off the LRVT, but she couldn’t in good conscience do that. And with the speaking tube in her other hand, she had no way to make him stop.

Jack licked across her clit, freeing it from the protective skin cover.

She pushed her hips into his face and panted, desperately trying to even out her breathing so the Nimrod wouldn’t notice anything. She swallowed and lifted the tube. “Nimrod, this…this is…is Tower One—Oh Lord! “

Jack tapped her bundle of sensitive nerves with his tongue and she lost all concentration. He pulled back the tiniest bit and looked up from between her splayed thighs. “I believe they require coordinates.”

She clenched the speaking tube against her chest again. “Stop while I talk to them. I can’t focus while you do this.”

One brow rose, and his smile turned dark. “No,” he said and went back to licking her.”

Well, I’m sure you can imagine what happens next;). Dirigibles Are Forever is available at all ebook retailers.

What would you do with your hunk at Christmas?

Now, this is a Hunky Holiday Blog Hop and that means I need to add some pictures.

Happy Holidays and a wonderful start to the New Year! 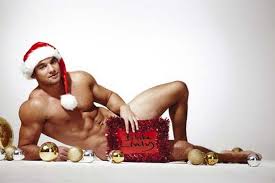 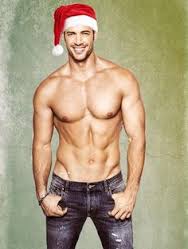