Today I have the final snippet from Rescue by Ruin, a Victorian steampunk story. Bea and Vaughn escaped the AirPirates and Lord Waldon and withdrew to Vaughn’s house where they shared some alone time. They were just getting to the juicy bits when they are interrupted by Gerrard, the butler.

“Sir, it appears that your expectations were indeed correct. Lord Waldon decided to visit, but due to the late hour he chose to come through the back door and be accompanied by four automatons; rather large automatons.”

Vaughn came to attention. “Are you and the rest of the staff all right?” Bea came to stand beside him; he held the receiver so she could hear what Gerrard had to say.

“Certainly, sir, the rest of the staff has left and your AetherBomb worked just as you planned. No machinery works inside the radius. It is as if an invisible shield surrounds me; two of his Lordship’s automatons attempted to come through, but just froze and then deactivated.” 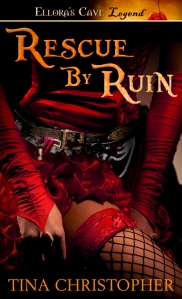 Forced to marry a violent man, Beatrice knows only one way out—ruin her reputation. She climbs aboard the Venia, a dirigible of ill repute, for a masquerade. Bea does not expect to run into Vaughn Kemple, the third Duke of Missenden, who eight months ago left her without an explanation. Feeling secure behind her mask, she decides Vaughn will be the one to ruin her. She may not get to spend forever with this man she still loves, but at least she can have one night of pleasure.

But a mask is not enough to hide her identity. Vaughn recognizes Bea, shocked to find her aboard an airship where sexual freedom isn’t just a thought, it’s celebrated. But her actions are far from innocent. Captivated, he’s determined to make her his.

The heat between them flares, but Vaughn is torn between desire and honor. Bea is afraid to risk her heart on a man she can’t trust. And when her future husband arrives on the scene, it’s more than their hearts in danger.

Buy it from Ellora’s Cave, Amazon or Kobo.

If you would like to win a copy of Rescue by Ruin come to HappilyEverAfterThoughts and comment. Contest runs until Tuesday 18th.